Once, some rishis headed by Kasyapa began to perform a sacrifice on the banks of the Ganges. Sage Narada visited them and asked them why they were performing the sacrifice and who would be pleased by it. Not being able to answer the question, the rishis approached Sage Bhrigu, who according to the Vedas, is believed to have an extra eye in the sole of his foot. To reach a solution after a direct ascertainment of reality, Sage Bhrigu first went to Satyaloka, the abode of Lord Brahma. At Satyaloka, he found Lord Brahma reciting the four Vedas in praise of Lord Narayana, with each of his four heads, and attended upon by Saraswati. Lord Brahma did not take notice of Bhrigu offering obeisance. Brighu left Satyaloka for Kailasa, the abode of Lord Shiva. At Kailasa, Bhrigu found Lord Shiva deep in meditation with Parvati by his side. Bhrigu called out to Lord Shiva with no response from the Lord, So left for Vaikuntha, the abode of Lord Vishnu.

At Vaikuntha, Lord Vishnu was reposing on Adisesha with Sri Mahalakshmi in service at his feet. Finding that Lord Vishnu also did not notice him, the sage was infuriated and kicked the Lord on His chest, the place where Mahalakshmi resides. Vishnu, in an attempt to pacify the sage, got hold of the legs of the sage and started to press them gently in a way that was comforting to the sage. During this act, he squeezed the extra eye that was present in the sole of Bhrigu's foot. The extra eye is believed to represent the sage's egotism. The sage then realized his grave mistake and apologized to Vishnu. Thereupon, the sage concluded that Lord Vishnu was supreme of the Trimurti and told the rishis the same.

Sri Mahalakshmi was angered by the action of Her Lord in apologizing to Bhrigu who committed an offense. Out of anger and anguish, She left Vaikuntha and resided in Karavirapur now known as Kolhapur. After the departure of Mahalakshmi, a forlorn Lord Vishnu left Vaikunta, came down to Earth, and took abode in an ant-hill under a tamarind tree, beside a pushkarini on the Venkata hill, meditating for the return of Lakshmi, without food or sleep. 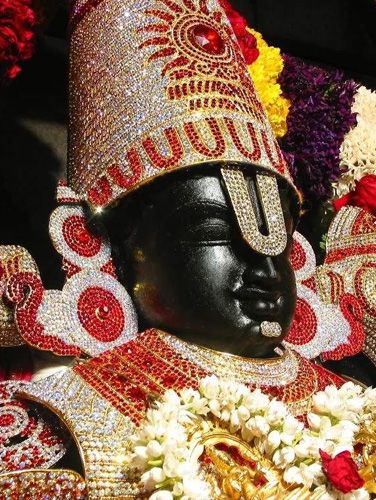