Suggested mantra for poojas
Kālī (/ˈkɑːli/; Sanskrit: काली), also known as Kālikā (Sanskrit: कालिका), is a Hindu goddess. The name Kali is derived from the Sanskrit "Kālá", or time — she therefore represents Time, Change, Power, Creation, Preservation, and Destruction. "Kali" also mean "the black one", the feminine noun of the Sanskrit adjective Kālá. Kali is worshiped as one of the 10 Mahavidya forms of Adi Parashakti and she is associated with the Kalikula sect of Shakta tradition.[citation needed]

Kali's earliest appearance is that of a destroyer principally of evil forces. Various Shakta Hindu cosmologies, as well as Shākta Tantric beliefs, worship her as the ultimate reality or Brahman; devotional movements worship Kāli as the benevolent mother of the universe, and also a great protector. She is often portrayed standing or dancing on her consort, the Hindu god Shiva, who lies calm and prostrate beneath her. Kali is worshipped by Hindus throughout India but particularly South India, Bengal, and Assam.

Kāli appears in the Sauptika Parvan of the Mahabharata (10.8.64). She is called Kālarātri (literally, "black night") and appears to the Pandava soldiers in dreams, until finally she appears amidst the fighting during an attack by Drona's son Ashwatthama.

Another story involving Kali is her escapade with a band of thieves. The thieves wanted to make a human sacrifice to Kali, and unwisely chose a saintly Brahmin monk as their victim. The radiance of the young monk was so much that it burned the image of Kali, who took living form and killed the entire band of thieves, decapitating them and drinking their blood. 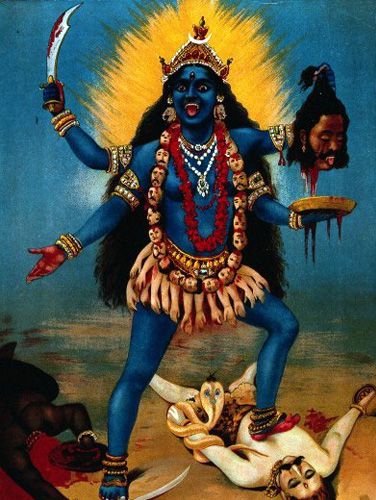