Hindus identify Krishna as the teacher of the sacred scripture called the Bhagavad Gita and as the friend and mentor of prince Arjuna in the epic the Mahabharata.

Suggested mantra for poojas
Krishna (/ˈkrɪʃnə/; Sanskrit: कृष्ण, Kṛṣṇa in IAST) is an avatar of the Lord Vishnu the Supreme God, and the king of Dwarka in the Dwapara Yuga worshipped across many traditions of religion in a variety of different perspectives. Krishna is recognised as the complete and or as the Svayam Bhagavan in his own right. Krishna is one of the most widely revered and popular of all Hindu deities. Krishna's birthday is celebrated every year by Hindus on the eighth day (Ashtami) of the Krishna Paksha (dark fortnight) of the month of Bhadrapad in the Hindu calendar.

Krishna is also known as Govinda, Mukunda, Madhusudhana and Vasudeva. Krishna is often described and portrayed as an infant eating butter, a young boy playing a flute as in the Bhagavata Purana, a young man along with Radha, a young man surrounded by beautiful women or as an elder giving direction and guidance as in the Bhagavad Gita. The stories of Krishna appear across a broad spectrum of Hindu philosophical and theological traditions. They portray him in various perspectives: a god-child, a prankster, a model lover, a divine hero, and the Supreme Being. The principal scriptures discussing Krishna's story are the Srimad Bhagavatam, the Mahabharata, the Harivamsa, the Bhagavata Purana, and the Vishnu Purana. The anecdotes and narratives of Krishna, in topic, are generally titled as Krishna Leela.

Worship of the deity Krishna, either in the form of deity Krishna or in the form of Vasudeva, Bala Krishna or Gopala can be traced to as early as the 4th century BC. Worship of Krishna as Svayam Bhagavan, or the supreme being, known as Krishnaism, arose in the Middle Ages in the context of the Bhakti movement. From the 10th century AD, Krishna became a favourite subject in performing arts and regional traditions of devotion developed for forms of Krishna such as Jagannatha in Odisha, Vithoba in Maharashtra and Shrinathji in Rajasthan. Since the 1960s the worship of Krishna has also spread in the Western world and in Africa largely due to the International Society for Krishna Consciousness (ISKCON). Gaudia Math is also a leading proponent of Krishna worship.

Some religiously oriented scholars have tried to calculate dates for the birth of Krishna, some believing that Krishna, under the name of 'Vasudeva Govinda Krishna Shauri', flourished as the ruler of Shuraseni and Vrishni tribes on the now-submerged island of Dwaraka (off coast Gujarat, India) sometime between 3200-3100 BC. 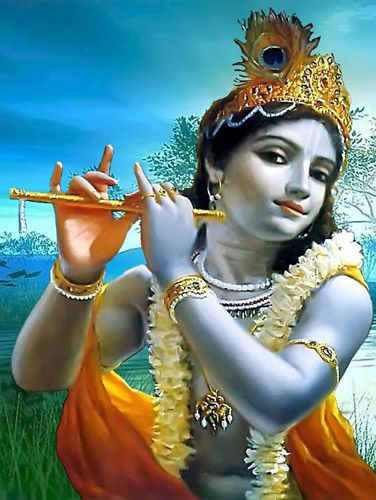