Lakshmi is the goddess of good fortune, wealth, and well-being. As the consort of Vishnu, she plays a role in every incarnation. (She is Sita, wife of Rama; Rukmini, wife of Krishna; and Dharani, wife of Parashu Rama, another avatar of Vishnu.)

Suggested mantra for poojas
Lakshmi (Sanskrit:लक्ष्मी, lakṣmī, ˈləkʂmiː) is the Hindu goddess of wealth, fortune, and prosperity (both material and spiritual). She is the wife and active energy of Lord Vishnu.Her four hands represent the four goals of human life considered important to the Hindu way of life – dharma, kāma, artha, and moksha. Representations of Lakshmi are also found in Jain monuments. In Buddhist sects of Tibet, Nepal, and southeast Asia, goddess Vasudhara mirrors the characteristics and attributes of the Hindu goddess Lakshmi with minor iconographic differences.

Lakshmi is also called Sri or Thirumagal because she is endowed with six auspicious and divine strength even to Vishnu. When Vishnu descended on the Earth as the avatars Rama and Krishna, Lakshmi descended as his respective consorts: Sita (Rama's wife) and Rukmini (Krishna's wife). In the ancient scriptures of India, all women are declared to be embodiments of Lakshmi. The marriage and relationship between Lakshmi and Vishnu as wife and husband, states Patricia Monaghan, is "the paradigm for rituals and ceremonies for the bride and groom in Hindu weddings."

Archaeological discoveries and ancient coins suggest the recognition and reverence for goddess Lakshmi in the Scytho-Parthian kingdom and throughout India by the 1st millennium BC. Lakshmi's iconography and statues have also been found in Hindu temples throughout southeast Asia, estimated to be from second half of 1st millennium AD.

In modern times, Lakshmi is worshiped as the goddess of wealth. She is also worshipped as the consort of Vishnu in many temples. The festivals of Diwali and Sharad Purnima (Kojagiri Purnima) are celebrated in her honor. 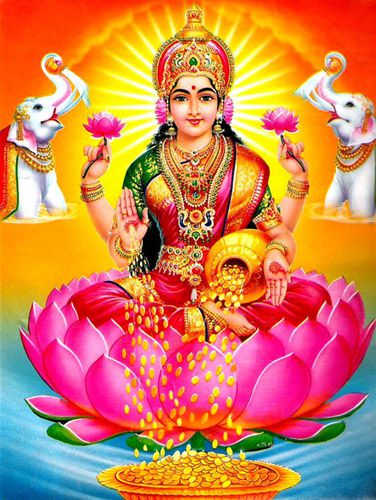