In Hindu astrology, Mangala is the name for Mars, the red planet. He is the god of war and is celibate. He is the owner of the Aries and Scorpio signs, and a teacher of the occult sciences.

Suggested mantra for poojas
In Hindu astrology, Mangala (Sanskrit: मङ्गल, Maṅgala) is the name for Mars, the red planet. He is the god of war and is celibate. He is considered the son of Bhumi, the Earth Goddess. He is the owner of the Aries and Scorpio signs, and a teacher of the occult sciences (Ruchaka Mahapurusha Yoga).

He is painted red or flame colour, four-armed, carrying a trident (Sanskrit: trishūla), mace (Sanskrit: gadā), lotus (Sanskrit: Padma) and a spear (Sanskrit: shūla). His mount (Sanskrit: vahana) is a ram. He presides over (Tuesday).

Once when Lord Shiva was engrossed in deep meditation (Sansrit: samādhi) upon his abode, Mount Kailash, three drops of perspiration originated from his forehead and fell down on the earth. From those drops manifested a very beautiful infant, who was of reddish complexion and who had four arms.

The child was handed over to the earth goddess, Bhumi for upbringing by Lord Shiva. The child was named Bhauma as he was nurtured and brought up by 'Bhumi' (earth).

When Bhauma grew up, he went to Kashi and did a tremendous penance to please lord Shiva. Lord Shiva blessed him by granting him 'Mangala loka' (the Abode of Mangala), which was superior even to the 'Shukra loka' (the Abode of the god of Venus - Shukra). The same Bhauma is established in the solar system by the name of Mangala (planet Mars).

In Vedic astrology Mangala is considered a malefic of the first order. He rules over the signs Mesha (Aries) and Vrishchika (Scorpio), is exalted in Makara (Capricorn) and has his fall in Karka (Cancer). The Sun, Moon and Jupiter are all considered friendly to him, while he is hostile to Mercury. Venus and Saturn are neutral. Mangala represents drive and physical energy, self-confidence and ego, strength, anger, impulsiveness, heroism and adventurous nature. Mangala rules over blood, muscles and bone marrow. He is associated with battle, war and soldiers.

Mangala is the lord of three nakshatras or lunar mansions: Mrigashīrsha, Chitra and Shravishtha or Dhanista. Mangala has the following associations: the color red, the metal brass, Copper and gem stone red coral. His element is Fire, direction is South, season is Summer. 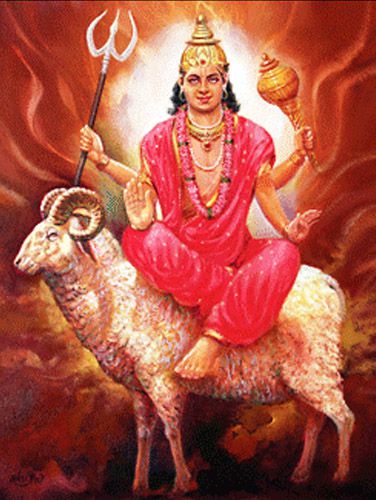