Murugan is the Hindu god of war. He is the Commander-in-Chief of the army of the devas and the son of Shiva.

Suggested mantra for poojas
Murugan also known as Kartikeya (Sanskrit: कार्त्तिकेय; Kārttikēya;), Skanda and Subramnya is the Hindu god of war. He is the Commander-in-Chief of the army of the devas and the son of Shiva. He is also the primary deity of the Kaumaram sect of Hinduism.

Murugan (Tamil Murugaṉ) is often referred to as Tamiḻ kadavuḷ ("God of the Tamils") and is worshiped primarily in areas with Tamil influences, especially in Tamilnadu and Puducherry, Sri Lanka, Mauritius, Indonesia, Malaysia, Singapore and Réunion. His six most important shrines in India are the Six Abodes of Murugan also known (Tamil) Arupadaiveedu literally meaning six warhouses, temples located in Tamil Nadu. In Bengal, Odisha and Maharashtra, he is popularly known as Kartikeya.

Kartikeya symbols are based on the weapons – Vel, the Divine Spear or Lance that he carries and his mount the peacock. He is sometimes depicted with many weapons including: a sword, a javelin, a mace, a discus and a bow although more usually he is depicted wielding a sakti or spear. This symbolizes his purification of human ills. His javelin is used to symbolize his far reaching protection, his discus symbolizes his knowledge of the truth, his mace represents his strength and his bow shows his ability to defeat all ills. His peacock mount symbolizes his destruction of the ego. His six heads represent the six siddhis bestowed upon yogis over the course of their spiritual development. This corresponds to his role as the bestower of siddhis. 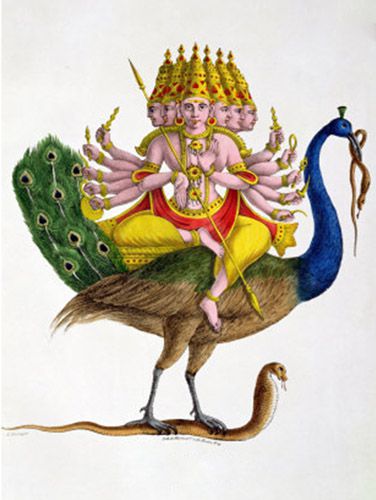