The goddess Saraswati is often depicted as a beautiful woman dressed in pure white, often seated on a white lotus, which symbolizes light, knowledge and truth.

Suggested mantra for poojas
Saraswati (Sanskrit: सरस्वती, Sarasvatī) is the Hindu goddess of knowledge, music, arts, wisdom and learning. She is a part of the trinity (Tridevi) of Saraswati, Lakshmi and Parvati. All the three forms help the trinity of Brahma, Vishnu and Shiva to create, maintain and regenerate-recycle the Universe respectively.

The earliest known mention of Saraswati as a goddess is in Rigveda. She has remained significant as a goddess from the Vedic period through modern times of Hindu traditions. Some Hindus celebrate the festival of Vasant Panchami (the fifth day of spring) in her honour, and mark the day by helping young children learn how to write alphabets on that day. The Goddess is also revered by believers of the Jain religion of west and central India, as well as some Buddhist sects.

Saraswati who is revered as a goddess of knowledge, music and arts is also found outside Nepal and India, such as in Japan, Vietnam, Bali (Indonesia) and Myanmar.

Saraswati is found in almost every major ancient and medieval Indian literature between 1000 BC to 1500 AD. In Hindu tradition, she has retained her significance as a goddess from the Vedic age up to the present day. In Shanti Parva of the Hindu epic Mahabharata, Saraswati is called the mother of the Vedas, and later as the celestial creative symphony who appeared when Brahma created the universe.

The goddess Saraswati is often depicted as a beautiful woman dressed in pure white, often seated on a white lotus, which symbolizes light, knowledge and truth. She not only embodies knowledge but also the experience of the highest reality. Her iconography is typically in white themes from dress to flowers to swan – the colour symbolizing Sattwa Guna or purity, discrimination for true knowledge, insight and wisdom.

The four hands hold items with symbolic meaning — a pustaka (book or script), a mala (rosary, garland), a water pot and a musical instrument (lute or vina). The book she holds symbolizes the Vedas representing the universal, divine, eternal, and true knowledge as well as all forms of learning. A mālā of crystals, representing the power of meditation, inner reflection and spirituality. A pot of water represents the purifying power to separate right from wrong, the clean from the unclean, and essence from the inessential. In some texts, the pot of water is symbolism for soma - the drink that liberates and leads to knowledge. The musical instrument, typically a veena, represents all creative arts and sciences, and her holding it symbolizes expressing knowledge that creates harmony. Saraswati is also associated with anurāga, the love for and rhythm of music, which represents all emotions and feelings expressed in speech or music. 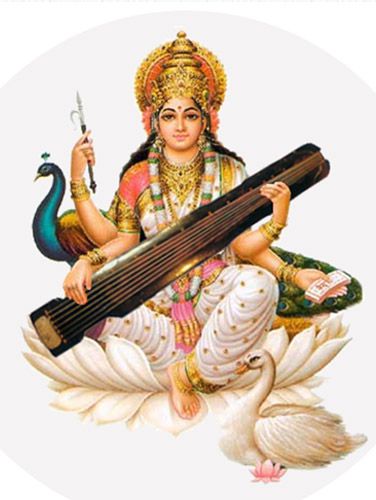