Shani is one of the Navagraha. Embodied in the planet Saturn and is the Lord of Saturday.

Suggested mantra for poojas
Shani dev (Sanskrit: शनि, Śani) is one of the Navagraha (the nine primary celestial beings in Hindu astrology) of Jyotiṣa. Shani dev is embodied in the planet Saturn and is the Lord of Saturday. Shani dev is also known as Śanaiścara (शनैश्चर).

The word shani also denotes the seventh day or Saturday in most Indian languages. The word shani (शनि) comes from Śanayē Kramati Saḥ (शनये क्रमति सः), the one who moves slowly, because Saturn takes about 30 years to revolve around the Sun.

Shani is a Deva and son of Surya and his wife Chhaya, hence also known as Chayyaputra. He is the elder brother of Yama, the Hindu god of death, who in some scriptures corresponds to the deliverance of justice. Surya's two sons Shani dev and Yama judge. Shani dev gives the results of one's deeds through one's life through appropriate punishments and rewards; Yama grants the results of one's deeds after death.

It is said that when Shani dev opened his eyes as a baby for the very first time, the sun went into an eclipse, which clearly denotes the impact of Shani dev on astrological charts. He is known as the greatest teacher and well wisher for the righteous as well the greatest punisher for those who follow the path of evil, betrayal, backstabbing and unjust revenge. Shani is also known as the lord of masses & God of Punishment and his blessings are thus considered very important in an individual's horoscope for bestowing him with mass following and popularity. He is depicted dark in colour, clothed in black; holding a sword, arrows and two daggers and mounted on a crow, which is Shani's vāhana. As protector of property, Shani dev is able to repress the thieving tendencies of birds.

Shani Jayanti the birth anniversary of Lord Shani falls on the Amavasya of Jyeshta month of Hindu calendar. 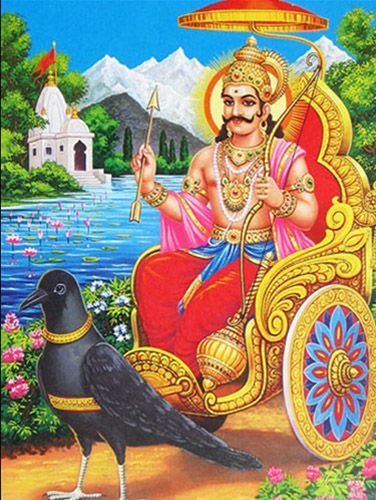