Shiva, meaning &quot;The Auspicious One&quot;, also known as Mahadeva (&quot;Great God&quot;), is one of the three major deities of Hinduism. Shiva is distinct from Vishnu and Brahma yet one with them. He is the Greatest of the Gods within Shaivism.

Suggested mantra for poojas
Shiva (/ˈʃivə/; Sanskrit: Śiva, meaning "The Auspicious One", also known as Mahadeva ("Great God"), is one of the three major deities of Hinduism. Shiva is distinct from Vishnu and Brahma yet one with them. He is Anant, one who is neither found born nor found dead. He is the Greatest of the Gods within Shaivism, one of the three most influential denominations in contemporary Hinduism. He is one of the five primary forms of God in the Smarta Tradition, and "the Transformer".

At the highest level, Shiva is regarded as limitless, transcendent, unchanging and formless. Shiva also has many benevolent and fearsome forms. In benevolent aspects, he is depicted as an omniscient Yogi who lives an ascetic life on Mount Kailash, as well as a householder with wife Parvati and his two children, Ganesha and Kartikeya, and in fierce aspects, he is often depicted slaying demons. Shiva is also regarded as the patron god of yoga and arts.

The main iconographical attributes of Shiva are the third eye on his forehead, the snake Vasuki around his neck, the adorning crescent moon, the holy river Ganga flowing from his matted hair, the trishula as his weapon and the damaru as his musical instrument. Shiva is usually worshiped in the aniconic form of Lingam. The worship of Shiva is a pan-Hindu tradition, practiced widely across all of India, Nepal and Sri Lanka. 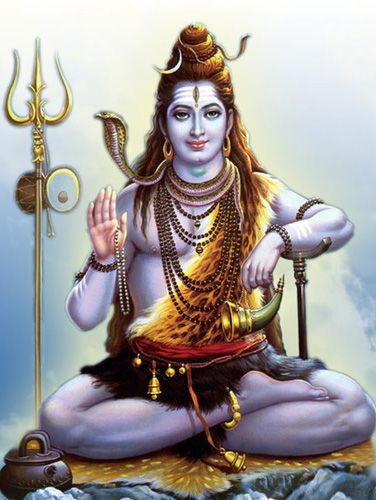