Vishnu is the second member of the Hindu Trinity. He maintains the order and harmony of the universe, which is periodically created by Brahma and periodically destroyed by Shiva to prepare for the next creation.

Suggested mantra for poojas
Vishnu (Sanskrit pronunciation: [vɪʂɳu]; Sanskrit: विष्णु, Viṣṇu) is one of the most significant deities in Hinduism. He is the form less Supreme God Svayam Bhagavan of Vaishnavism (one of the principal denominations of Hinduism). He is also known as Narayana and Hari. As one of the five primary forms of God in the Smarta tradition, he is conceived as "the Preserver or the Protector".

In Hindu sacred texts, Vishnu is usually depicted as having the dark complexion of water-filled clouds and having four shown as a pale blue being, as are his incarnations Rama and Krishna. He holds a padma (lotus flower) in his lower left hand, the Kaumodaki gada (mace) in his lower right hand, the Panchajanya shankha (conch) in his upper left hand and the discus weapon considered to be the most powerful weapon according to Hindu Religion Sudarshana Chakra in his upper right hand. 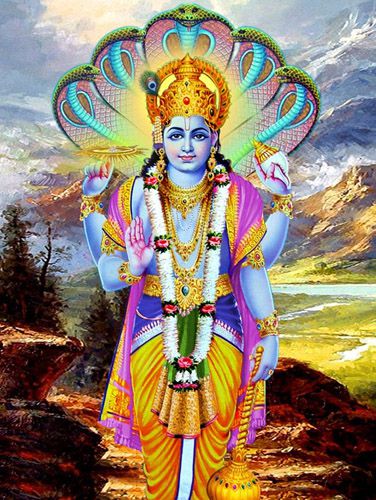